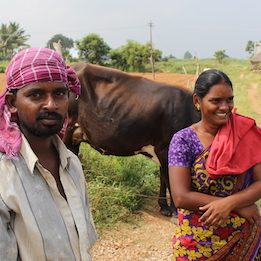 A former ASSAR researcher with the Ashoka Trust for Research in Ecology and the Environment (ATREE) in Bangalore, Divya Solomon had the opportunity to explore gender dynamics in agriculture, irrigation and groundwater depletion in Tamil Nadu, India, thanks to a Small Opportunity Grant and an exchange with the University of East Anglia (UEA).

How is ASSAR’s work on gender innovative?

There has been international attention on the adaptation of communities to climate change, however studies on the impact of adaptation on individuals within households remain scarce. Despite significant efforts from feminist scholars the household continues to be seen as a single homogenous unit.

ASSAR’s work on gender has been pathbreaking in this regard. Using multiple methods including quantitative surveys and qualitative ethnographic field methods, ASSAR has strived to bring in a nuanced understanding of gender, not simply looking at gender binaries but probing further, teasing apart the role of intersecting variables such as caste, ethnicity, and age.

ASSAR’s research has highlighted the differences between men and women in the ways they adapt and experience climatic changes. By moving past focusing solely on women ASSAR has brought to the forefront other important issues such as the vulnerability of young men in drylands. ASSAR’s multiple sites across India and Africa along with an emphasis on knowledge sharing between sites and regions allowed us to develop a multi perspective approach to understand the gendered realities of the impacts of climate change.

What is your best memory from performing the field research on the impact of depleting groundwater on women’s livelihoods?

The most interesting aspect of the field research was the co-learning that occurred during the focus group discussion with women in the region. My questions often facilitated these women to discuss issues helping them recognize their own vulnerabilities and through discussion with the group understand important characteristics of this vulnerability.

How do you foresee your research impacting the local communities?

Groundwater depletion has been studied extensively in India – however, very few studies recognize the multiple gendered effects of this depletion. My research has been presented to government officials in Tamil Nadu as a part of ASSAR ATREE’s policy engagement strategy, helping to build awareness among of the impacts of the depletion on women’s wellbeing. Hopefully the findings from this study will be taken forward in the form of tangible programs for these women.

What have been the advantages in participating in the exchange with the University of East Anglia (UEA)?

The exchange was extremely useful as it helped me connect with other researchers working at UEA. Most importantly this was a time of learning and reflection under the mentorship of Dr Nitya Rao who not only provided me with resources to conduct my analysis but helped to enrich my thinking from her vast and unique repertoire of work on women in agriculture in South India. During this time I learned how to use a gender lens to look at a research problem moving beyond a superficial analysis of male headed vs female headed households.

How has the exchange impacted your career and your approach?

My time at UEA has really shaped my path as a researcher. The exchange helped me develop a strong interest in gender studies within the adaptation and vulnerability research that I was already engaged in. This time made me realize the importance of understanding gender dynamics within households and the crucial role these dynamics play in the way resources and risks are managed – a household is not always an egalitarian unit but rather it is a site for bargaining.

What have you been up to since the exchange?

Since my time in ASSAR I have moved on to work on my Phd. The exchange has strongly influenced my research direction and shaped my ideas. Taking my research forward I will be using a gender lens to analyze how agricultural adaptation practices impact men and women’s wellbeing through labor allocations and agency.