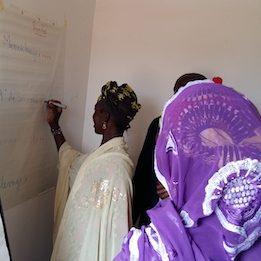 A conversation with Edmond Totin and Amadou Sidibé on a project aimed at empowering women in Mali through business resources and training.

What led you to this project, and why did you use a business angle?

Edmond – During the diagnostic study conducted at the early stage of ASSAR, we identified young women as a particularly vulnerable group in Mali’s Koutiala district, and we recognized the need to strengthen their capacity to adapt to climate change. We wanted to put in place a process that would support them even after the end of ASSAR, and we thought that we could focus on providing resources for women’s businesses.

We worked with a group of young women to develop business plans that they could use to get loans by local banks. Partnering with an NGO, we set up a system for technical support, including training on production processes and joint evaluation of outcomes. We believe that this mechanism will help this group of women expand their business, enabling them to reimburse the loan from the banks. We expect this kind of system to sustain and from the first feedback received, things are working that way.

How does climate change impact young women in Koutiala?

Amadou – The pressure on natural resources may increase young women’s vulnerability by reducing their access to land therefore their adaptation options.

What will be the project’s long-lasting impact?

Amadou – The project established a network among women from different villages who had no previous contact with one another. Going forward, this network can be leveraged for any other activity that covers these villages.

Edmond – One of the women in the group told us: “The knowledge we now have will last forever. It is far better than receiving a sum of money that, once used, is gone.”

What role do you think other household and community members play in supporting young women in Koutiala?

Amadou – Village authorities joined the women during the discussions for the choice of the villages in which the project was to be implemented. The authorities guaranteed to the women group access to the necessary acreage of land and also expressed their readiness to support women financially and with labor as their contribution to the initiative.

What have you learned from this activity?

Edmond – I learned a lot, for instance I became more aware of the potential of the adaptive capacity of local communities. Also, I learned that designing a capacity building agenda together with stakeholders is more valuable because it helps to really consider the potential, needs and expectations of our stakeholders.