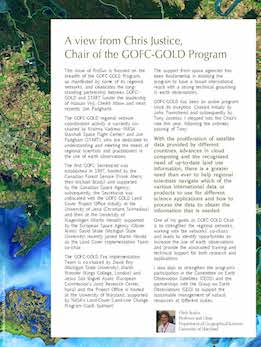 This issue of ProSus is focused on the breadth of the GOFC-GOLD Program, as manifested by some of its regional networks, and celebrates the longstanding partnership between GOFC-GOLD and START (under the leadership of Hassan Virji, Cheikh Mbow and most recently Jon Padgham).

The GOFC-GOLD regional network coordination activity is currently co-chaired by Krishna Vadrevu (NASA Marshall Space Flight Center) and Jon Padgham (START), who are dedicated to understanding and meeting the needs of regional scientists and practitioners in the use of earth observations.

The first GOFC Secretariat was established in 1997, hosted by the Canadian Forest Service (Frank Ahern, then Michael Brady) and supported by the Canadian Space Agency; subsequently, the Secretariat was collocated with the GOFC-GOLD Land Cover Project Office initially at the University of Jena (Christiane Schmullius) and then at the University of Wageningen (Martin Herold), supported by the European Space Agency (Olivier Arino). David Skole (Michigan State University) recently joined Martin Herold as the Land Cover Implementation Team co-chair.

The support from space agencies has been fundamental in enabling the program to have a broad international reach with a strong technical grounding in earth observations.

GOFC-GOLD has been an active program since its inception. Chaired initially by John Townshend and subsequently by Tony Janetos, I stepped into the Chair’s role this year, following the untimely passing of Tony.

With the proliferation of satellite data provided by different countries, advances in cloud computing and the recognized need of up-to-date land use information, there is a greater need than ever to help regional scientists navigate which of the various international data or products to use for different science applications and how to process the data to obtain the information that is needed.

One of my goals as GOFC-GOLD Chair is to strengthen the regional networks, working with the networks’ co-chairs and leads to identify opportunities to increase the use of earth observations and provide the associated training and technical support for both research and applications.

I also plan to strengthen the program’s participation in the Committee on Earth Observation Satellites (CEOS) and the partnerships with the Group on Earth Observations (GEO) to support the sustainable management of natural resources at different scales.