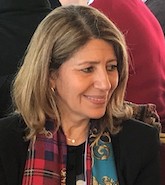 “The MaghLag project brought multiple benefits to the people involved and to the region. It provided an opportunity for both established scientists and students to connect across borders and advance science in the region. A number of papers were and are still produced as a result of the collaborations initiated by the project.” Maria Snoussi, Professor at University Mohammed V-Agdal in Rabat, Morocco.

From 2011 to 2012, Maria Snoussi assembled a team of researchers from North Africa to study coastal lagoons in Morocco, Tunisia, and Algeria. The project, supported by a START Global Environmental Change (GEC) grant, aimed at improving cooperation among regional scientists and calling attention to the lagoons’ economic and ecological importance.

The lagoons are home to many species of fish and shellfish and attract large numbers of migrating birds. They are vital to local economies. As an example, one-third of the residents in the watershed of Algeria’s Mellah lagoon live directly or indirectly from the lagoon’s fishery.

However, the lagoons are also highly-vulnerable ecosystems, threatened by population growth, pollution, and climate change. Alterations to water in-flow or temperature can deplete fish populations and put livelihoods and local food security at risk.

“Almost ten years later, the connections developed during the project are still strong. Even if MaghLag was never formally established as an association, researchers involved in the project are still collaborating, and meet regularly through other networks such as EuroLag and EuroMedLag,” adds Maria.

“MaghLag created a wonderful dynamic environment for collaboration, which benefitted to both students and senior researchers. For example, in my case, the connections with the French Research Institute for Development (Institut de recherche pour le développement – IRD) developed through MaghLag, evolved into a stronger collaboration and contributed probably to my election as President of the IRD’s Scientific Council,” states Maria.

Besides her leadership role with the IRD, Maria is involved with several other programs including MedWet (the Mediterrenean Wetlands Initiative), as Chair of the scientific and technical committee on wetlands and climate change, and MedECC (the network of Mediterranean Experts on Climate and Environmental Change), as steering committee member. She will soon be retiring from her position of Professor at the University of Rabat, but she has no intention to slow down: her current projects include an analysis on the blue economy that will support the government of Morocco in the development of a national strategy.