Participants gathered in Windhoek - they included representatives from the Namibian National Climate Change Committee (NCCC), national Ministries of Environment and Tourism, Fisheries and Marine Resources, the Development Bank of Namibia, the National Youth Council, the City of Windhoek and others.

A Small Opportunity Grant funded by FRACTAL, managed by START and implemented by ICLEI Africa, enabled national and city stakeholders from Lusaka, Zambia and Windhoek, Namibia, to engage in discussions on the cities’ contribution to national and international climate change commitments.

The ICLEI Africa team discusses highlights and impacts of the Cities and Regions Talanoa Dialogues organized by ICLEI and partners in 40 countries.

Cities around the world have been in the spotlight for their ambitious climate plans and actions, and climate researchers have been supporting them to access better data and build more resilient decision-making pathways. But connections between local and national level governments, and local and national level research, need to be strengthened to see climate action scaled up. ICLEI Africa has been at the forefront of strengthening multi-level governance on the African continent through its continued implementation of multi-stakeholder dialogues.

In 2017, facilitative dialogues took place around the world to take stock of progress towards the long-term goals of the Paris Agreement, and the implementation of Nationally Determined Contributions (NDCs). These dialogues were known as Talanoa Dialogues – Talanoa is a traditional Fijian word used in the Pacific region to reflect a process of inclusive, participatory and transparent dialogue. The ethos of the dialogue was to bring together stakeholders to discuss cross-cutting challenges in a space conducive to honest and open communication.

The Cities and Regions Talanoa Dialogues had a specific focus on enabling discussions related to how cities and towns engage with and contribute to national and international climate change commitments, policies and plans. The dialogues were a way to facilitate critical multi-level governance and knowledge sharing. They were launched at the ninth World Urban Forum in 2018, with the Global Covenant of Mayors for Climate & Energy (GCoM) and the United Nations Human Settlements Programme (UN-Habitat) as special partners to ICLEI.

ICLEI and partners coordinated more than 60 Cities and Regions Talanoa Dialogues in 40 countries, including eight held by ICLEI Africa and partners in seven African countries.  The outcomes of the African Cities and Regions Talanoa Dialogues served as crucial input for both official meetings of UNFCCC supreme bodies as well as at numerous side events held at COP24, providing a set of hands-on suggestions to enhance the level of NDC ambition through multilevel governance approaches based on the unique perspective of Africa, highlighting the need for access to finance, technology and capacity building for achieving sustainable urban development in a holistic, inclusive manner.

High-level findings from these eight Dialogues included lessons on:

With additional resources and targeted capacity building, successful projects being implemented at the local scale can be scaled-up and developed into bankable projects that attract international finance.

With the creation of safe spaces for subnational and national government actors to interact, subnational actors can better align their actions to meet national targets, building momentum from the ground up.

Rich sharing of lessons occurs when cities meet to discuss the barriers and enablers they face when implementing climate action. By enabling such engagements that then contribute to the implementation and revision of a country’s NDC, not only leads to a more inclusive and transparent NDC, but also avoids similar mistakes being made, and increases the harnessing of good practice.

The aims of the Dialogues spoke directly to FRACTAL’s efforts to host open forum discussions through learning labs and dialogues of their own, bringing together multiscale, transdisciplinary actors to discuss local issues of climate change in nine southern African cities and regions.

Funded by START and implemented by ICLEI Africa, as part of FRACTAL’s consortium partners, a Small Opportunity Grant enabled Cities and Regions Talanoa Dialogues to be integrated into city learning processes in Lusaka, Zambia, and Windhoek, Namibia. The dialogues reviewed available climate change information, what information was used to develop the NDCs, and how the NDCs link to local action.

In August, twenty two participants met in Lusaka to answer fundamental questions posed by the Dialogues: Where are we? Where do we want to go? How do we get there?

The participants at Zambia’s Talanoa Dialogue included local government representatives from Lusaka City Council and national representation from the National Water Supply and Sanitation Council (NWASCO). Other participants included the Lusaka Water and Sewerage Company (LWSC), the Lusaka Water Security Initiative (LUWSI) and researchers from the University of Zambia. Participants indicated that the NDC should be incorporated into existing strategic and development plans in Zambia such as the Zambian National Development Plan. The Dialogue highlighted the need for improved information sharing, local level training and coordination across relevant sectors, especially transport, energy, water and waste.

Gilbert Siame, Director of the Centre for Urban Research and Planning at the University of Zambia and FRACTAL’s PI in Lusaka, was excited by the way in which the Talanoa Dialogues promoted bottom-up governance in Zambia – something he described as the chance to “push from below.” He says, “It will actually serve to seriously set or insert the city agenda in the climate issues for the country.”

At the dialogue in Namibia in October, there were members of the Namibian National Climate Change Committee, national and local representatives, as well as representatives from the World Food Programme, the Development Bank of Namibia, and the University of Namibia. In Namibia, the implementation of the NDC was seen as an ongoing challenge. At present, local level policies do contribute to the NDC but reporting coordination of these efforts could be improved. Upskilling, information sharing and a better flow of resources to local and regional governments were discussed as means to advance implementation while encouraging increased buy-in from the private sector and facilitating access to a range of funding organisations can help to build bankable projects. 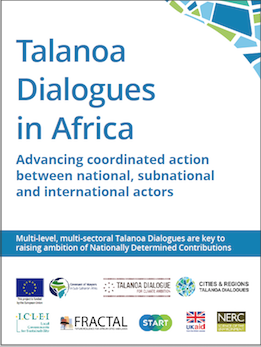 An ICLEI publication on the Talanoa Dialogues held in Africa can be found here. More information: http://africa.iclei.org/news-events/news-details/article/talanoa-dialogues-in-africa-highlighting-the-value-of-multi-level-governance-for-climate-action.html