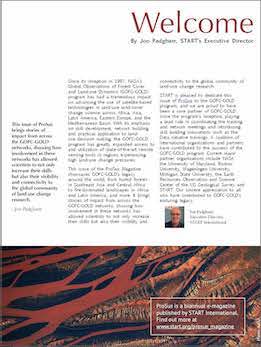 Since its inception in 1997, NASA’s Global Observations of Forest Cover and Land-use Dynamics (GOFC–GOLD) program has had a tremendous impact on advancing the use of satellite-based technologies in land-use land-cover change science across Africa, Asia, Latin America, Eastern Europe, and the Mediterranean Basin. With its emphasis on skill development, network building, and practical application to landuse decision making, the GOFC–GOLD program has greatly expanded access to and utilization of state-of-the-art remote sensing tools in regions experiencing high land-use change pressures.

This issue of the ProSus Magazine showcases GOFC-GOLD’s legacy around the world, from humid forests in Southeast Asia and Central Africa to fire-dominated landscapes in Africa and Latin America, and more. It brings stories of impact from across the GOFC-GOLD networks, showing how involvement in these networks has allowed scientists to not only increase their skills but also their visibility and connectivity to the global community of land-use change research.

START is pleased to dedicate this issue of ProSus to the GOFC-GOLD program, and we are proud to have been a core partner of GOFC-GOLD since the program’s inception, playing a lead role in coordinating the training and network meetings and introducing skill building innovations such as the Data Initiative trainings. A coalition of international organizations and partners have contributed to the success of the GOFC-GOLD program. Current major partner organizations include NASA, the University of Maryland, Boston University, Wageningen University, Michigan State University, the Earth Resources Observation and Science Center of the US Geological Survey and START. Our sincere appreciation to all who have contributed to GOFC-GOLD’s enduring legacy.