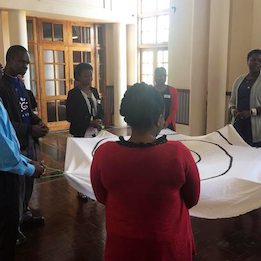 We asked Dianne Scott, from the University of Cape Town’s African Centre for Cities, to tell us more about FRACTAL’s transdisciplinary governance research.

One of the aspects that differentiated FRACTAL was the focus on governance research to support FRACTAL’s goal of integrating climate science into decision-making. We looked at the particular configurations of water and climate change governance in each city, looking at the architecture of decision-making. We identified the hard elements – the actors, policies/legislation, institutions, forums, etc. – and we were able to uncover some of the soft elements which are quite informal and implicit – the relationships and power relations between actors, and their informal interactions.

While other research in this space assumes a linear relation between producers of climate knowledge and local officials, FRACTAL, on the other hand, cultivated a dialogical relationship. Typically, climate projects speak in highly abstract and unfamiliar conceptual terms about the intricacies of climate patterns or governance, or use highly normative terms about what should be done differently. This is unlikely to achieve a sense of safety and openness.

FRACTAL used experiential learning processes to dig deep in the local, socially relevant questions. The new knowledge we were gaining through research was iteratively emerging during the learning lab engagement processes. In other words, we learned from the bottom up, and that has resulted in a much more “local” knowledge focus in the governance spaces of seven cities, very different from the siloed approaches used by other climate services projects.

Through this inductive, bottom-up learning we came to understand that this approach created a receptivity to new ideas and ways of viewing local problems.

Receptivity goes further than simply opening up, it entails actively and critically reflecting on one’s own knowledge and that offered by others. As such, receptivity to other frames of reference is in no way passive. Rather it is a way of engaging, thinking and acting in relation with others that is open and considered, with a willingness to share, to let go, to take on and arrive at new insights and new ways of thinking and being.

Receptivity – of decision-makers, scientists and other knowledge-holders and actors – can be exercised and increased, so as to enhance the co-production of climate information and its use in making decisions about urban development and management.

The FRACTAL learning labs were set up as safe spaces where all participants were considered equal and everyone’s knowledge was valued. During these engagements participants began to stand in the shoes of others and understand other points of view. This mutual learning process cultivated receptivity, and provided participants with the opportunity to develop a more informed and broader understanding of the issues discussed. Social science literature revealed much thinking about this concept which advanced our understanding further.

The labs’ collaborative and participatory processes did indeed foster the receptivity and reflective judgement of the actors involved – including city stakeholders who will be more willing to integrate climate information when taking decisions that will impact future pathways for their cities.

Photo: Participants engage during a learning lab in Harare, Zimbabwe