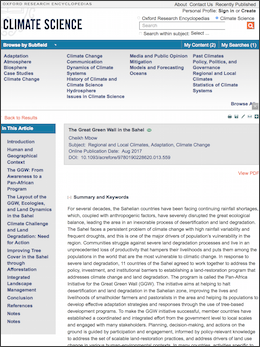 For several decades, the Sahelian countries have been facing continuing rainfall shortages, which, coupled with anthropogenic factors, have severely disrupted the great ecological balance, leading the area in an inexorable process of desertification and land degradation. The Sahel faces a persistent problem of climate change with high rainfall variability and frequent droughts, and this is one of the major drivers of population’s vulnerability in the region. Communities struggle against severe land degradation processes and live in an unprecedented loss of productivity that hampers their livelihoods and puts them among the populations in the world that are the most vulnerable to climatic change. In response to severe land degradation, 11 countries of the Sahel agreed to work together to address the policy, investment, and institutional barriers to establishing a land-restoration program that addresses climate change and land degradation. The program is called the Pan-Africa Initiative for the Great Green Wall (GGW).