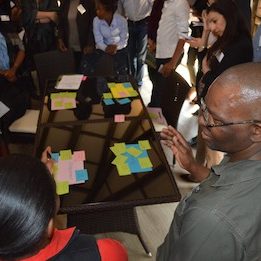 It’s challenging to provide a concise overview of FRACTAL; to do justice to the various elements and the countless lessons that have been learned. I’ve tried to capture some of the key concepts, methods and outcomes associated with the work undertaken over the past four years in this opening piece… but FRACTAL is somewhat of a kaleidoscope in terms of the ‘take home messages’. Luckily, this ProSuS issue provides several perspectives of the work undertaken, the lessons learned and the major outcomes.

The overarching aim of FRACTAL was to co-produce relevant climate knowledge to support resilient development pathways of African cities. Its three main objectives were to deepen understanding of city specific contexts, unpacking urban climate change risks and impacts; to explore the decision-making space in the FRACTAL cities and look for opportunities to better incorporate climate knowledge into decision-making contexts; and advance understanding of physical climate processes that govern the regional system (observed and simulated) and develop robust and scale relevant climate information.

African cities are complex, characterized by emergent properties and dynamism. Acknowledging that most modalities of climate services are largely supply driven and rarely begin with the multiplicity of climate sensitive development challenges in these cities, FRACTAL aimed to do things differently from the beginning, focusing first on understanding the decision context and allowing climate information needs to emerge over time.

This approach explicitly acknowledged the importance of contextual decision processes in southern African cities and challenged the notion that the most notable barrier to climate resilience is a lack of topical research, climate change information and user platforms. 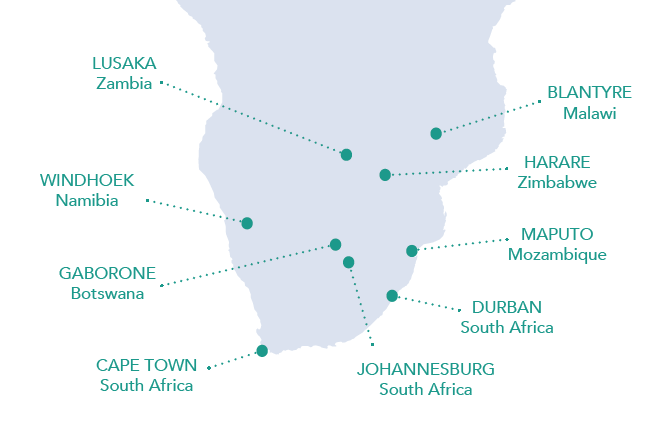 FRACTAL trialed novel transdisciplinary methods for bringing stakeholders and knowledge types together so that each city’s unique issues could be co-defined, climate change risks explored and opportunities for resilience collaboratively framed. These spaces included exploratory city learning labs, field trips, games, roleplays, social evenings, training events, high-level breakfasts and very honest discussions about how scientific knowledge is generated; what is the evidence used, as well as the decisions and trade-offs that need to be made to arrive at a knowledge product. Learning labs anchored the learning processes in each city. Learning labs are engagements that include a variety of stakeholders in framing problems that they perceive as relevant and urgent, and contributing knowledge in an attempt to improve or change the situation. An Embedded Researcher approach was also implemented, allowing researchers to straddle the science-policy interface by sitting within local decision-making organizations. This framework has been well received and replicated in FRACTAL cities, encouraging good working partnerships. Another novel method that was trialed in FRACTAL was co-production of Climate Risks Narratives (CRNs): stories that paint pictures of the potential future of the city under a changing climate, produced by all participants of the learning labs. Narratives were initially developed as climate information communication devices because traditional methods generally use complicated visualizations and technical jargon that is not easy to interpret. These traditional methods also generally fail to effectively communicate and promote conversations about uncertainty, an aspect that was explicitly acknowledged through co-development of CRNs by exploring multiple potential climate futures. Narratives gained traction by allowing participants of learning labs access to complex science so that they could build stories in their head that explained the information with which they were engaging.

Several impacts have been realized through these methods, related to personal experiences, research frontiers, institutional learnings, and decision-making for resilience in southern African cities. The team is still busy capturing knowledge that has been generated, particularly related to: climate dynamics and processes in the southern African region; the characteristics of these cities; climate risks within local development contexts; decision-making structures and pathways relevant to climate change resilience; understanding the value of climate information within these; as well as types of climate information that might be useful for people making decisions in southern African cities.

We have also gained much understanding about inclusive, collaborative and participatory approaches for dealing with complex issues such as climate risks in southern African cities.

Apart from gains in research, numerous other impacts are evident. The types of activities that were prioritized in FRACTAL (i.e. across different organizations and cities), as well as the mechanisms for implementation of these, have contributed to strong relationships and networks.

Through these networks, decision-makers and researchers in southern African cities are able to broaden their perspectives and learn from best practices, especially from cities facing similar challenges in the same regional context.

Learning processes within and across cities that support joint exploration of issues, as well as knowledge sharing and co-production, provide inspiration and support for stakeholders who are tasked with dealing with climate change. Building trust is crucial and this trust has benefits beyond the project.

Other impacts include increased awareness in all cities; of the risks posed by climate change in these contexts and potential ways of managing these risks. Much of this knowledge was generated through co-producing CRNs with stakeholders in Blantyre, Cape Town, Gaborone, Harare, Lusaka, Maputo and Windhoek.

This is a brief overview of some of the FRACTAL work. Examples of research, impacts and reflections are featured in this issue. Enjoy!

Photo: Participants engage during a learning lab in Windhoek, Namibia