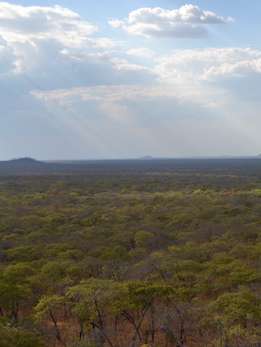 The Miombo woodlands span seven Southern African countries that are home to over 70% of Southern Africa’s human population. This fragile ecosystem is facing a multitude of deforestation and forest degradation pressures. Earth observations are key to better understanding how forest cover change is affecting the integrity of the Miombo woodlands. The information produced through earth observations supports key decisions about conservation, restoration and management of the area. For example, it can be used to create easily accessible web-based systems that allow local-level planning decisions to be communicated with local communities, such as regarding existing stocks, areas of degradation, or for planning management activities. However, access to internet and cloud-based platforms are important impediments to allowing the Miombo region greater independence in producing relevant information.

Founded in 1995, the Miombo network is the oldest regional GOFC-GOLD network in Southern Africa. It has a strong legacy of producing scientifically credible and relevant information in support of regional resource management, strengthened research and publication capacities, and increased awareness about the critical importance of Miombo woodlands and their conservation needs.

Network members have produced policy briefs which focus on Miombo restoration, land-use planning, sustainable management and forest policy. Members have also submitted to Springer a scientific book on Miombo in the global change context, that will be published and accessible to the wide scientific and decision making communities in September 2020.