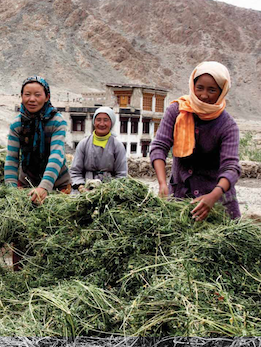 The Catalysts of Change project attempted to study the relationship between local multi-stakeholder forums and the policy environment post-disaster contexts.

It focused on two desert regions with recent climate- induced disasters: Barmer, Rajasthan and Leh, Ladakh. The main research project was supported by pilot activities in the two areas. A community radio group of adolescent girls was formed in Rajasthan. An automatic weather station and climate school were tried in Ladakh. The pilot also entailed much research, documentation and advocacy around broader issues and experiences due to climate change in the regions.