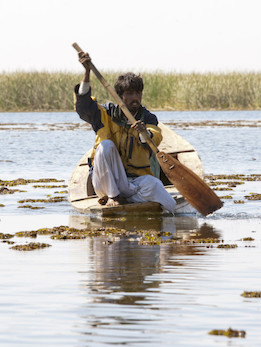 In the Indus ecoregion, climate change has had enormous impacts on the freshwater ecosystem. Increased frequency of floods, storms and changes in water temperature have reduced fish supply and destroyed productive assets. Increased drought and water stress and growing incidences of vector borne diseases have affected livestock productivity. These impacts have detrimental effects on the livelihoods of both local fishermen and livestock breeders.

This project worked towards closing the policy gaps relating DRR and CCA. It studied the productivity losses associated with disasters and climate change impacts in the livestock and fishery sectors. The findings have been used to inform key government departments and line agencies about priority actions needed to mitigate economic losses and increase resilience.

The project also included bottom-up measures such as aquaculture training that has engaged women and helped fishermen become self-sufficient.

Explore reports, movies, policy briefs and other outputs on the project’s microsite.

This effort is one of six projectsfunded by CDKN and START between 2012 and 2014, focusing on disaster risk reduction and climate change adaptation in South Asia.