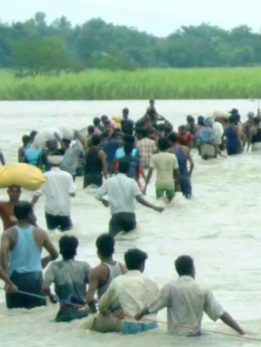 The trans-boundary Koshi River originates in China, passes through the hills of Nepal and the plains of both Nepal and India before meeting the Ganges. It is also one of the most deadly rivers in terms of damage to property, agriculture and loss of life over the years – most recently with the 2008 floods. Climate change is adding additional stress.

The Koshi High Dam, envisaged in 1937 as a permanent cure to the flooding problem, has again come into focus for flood control, irrigation and hydropower generation. A concrete dam with a height of 239 metres, not just Nepal but India and Bangladesh have shown interest as well. However, apart from the socio-political issues, even structurally the dam is not as simple as it seems.

In fact, the research and simulations suggest that with climate change underway, there will be an increase in extreme flood events and high sediment load. In response, the design flood values currently being used for hydraulic structures needs to be increased by 2.6 times to incorporate these risks and dead storage needs to be increased by over 100 percent.

This project investigated the impact of climate change on such current and future development in the Koshi River Basin, proposing adaptation measures and policy innovations. The study included advancing knowledge on climate change, revisiting design standards/values of the proposed dam, assessment of socio-economic vulnerability, contribution to policy formulation and awareness building of the new generation.

Explore reports, blog posts, photos and other outputs on the project’s microsite.