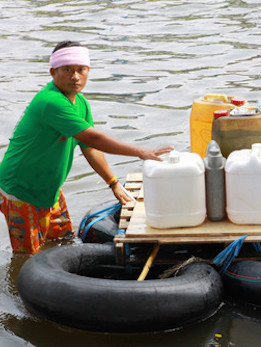 Katie Dietrich from START reflects on the key lessons which have emerged from the CDKN/ START research programme on climate-smart disaster risk management in South Asia.

South Asia is already one of the most vulnerable regions in the world to climate-related disasters. Pakistan’s 2010 floods left an estimated 6 million people without shelter. Cyclone Nargis, which hit Myanmar in May 2008, caused over 138,000 fatalities. Between 1980 and 2010 Asia experienced 4,950 such disasters, more than any other continent (CDKN, 2012).

As the IPCC’s Special Report on climate extremes (SREX) tells us, we should expect the number and impact of these extreme events to get worse in the future. The relationship between climate change and disasters is complicated, and closely connected to development patterns. It is now widely accepted that we need long-term climate change adaptation (CCA) informing and integrating within disaster risk reduction (DRR) plans and actions.

Mainstreaming of CCA and DRR is increasingly on the forefront of policy discussions on disaster management, yet action on this integration is lagging. Six research projects from India, Pakistan, and Nepal have been developing and testing realistic approaches to achieve this integration. The learning from their work was discussed and synthesised during the CDKN+START Learning Forum in Delhi from 8-10 February, 2014.

The co-investigators from the six research projects at the event explored the research findings and experiences with a focus on three themes:

1. Institutional arrangements and governance structures that influence the degree of flexibility of climate considerate DRR across varying scales
2. The changing nature of systemic development factors (both endogenous and exogenous) that shape vulnerability to disaster
3. Policy innovations that promote convergence of DRR and CCA into policy and practice at varying scales

A clear message that came out from all the research projects was that despite the narrative of mainstreaming CCA and DRR now being familiar in global and national conferences and research, and in some cases in national policy frameworks, the reality on the ground is very different. The research found that climate change and DRR continue to be two separate and uncoordinated planning streams that do not speak to each other. The group tried to identify the factors contributing to this disconnect and possible steps in bridging the DRR-CCA gap. Some of the key observations include the following:

Advocating for mainstreaming has not led to action

Whether researchers, practitioners, community members, or policy-makers, we are all advocating for mainstreaming climate change into policies and actions related to disaster management. However, the co-investigators asserted that words rarely turn to action, or at least only slowly. The six research projects explored the possibilities of mainstreaming CCA into DRR from the community scale to national policy. SEEDS India worked with communities in Rajasthan and Ladakh to develop community-based monitoring of weather to prepare for and understand disasters such as floods and droughts in the context of changing long-term weather patterns. In contrast, IntercooperationSocial Development India (ICSD) and the All India Disaster Mitigation Institute (AIDMI) explored how to achieve institutional integration between CCA and DRR at the national, state and district level.

It’s about planning, not only response

When a disaster strikes, there is always a response, but that can be ad-hoc and disorganised, and use human and financial resources poorly. With the increasing pressures of climate change, disaster management requires planning for long and short term risks rather than dependence on post-disaster management. Such planning involves working across vertical and horizontal scales and across sectors to better prepare for, anticipate, and manage possible disasters. Based on their case study of flooding in Gorakphur, the Gorakhpur Environmental Action Group (GEAG) and Institute for Social and Environmental Transition (ISET) developed a training module for disaster managers and planners which will be used across districts nationwide.

Who does the planning?

The detail about who is responsible for the integration of DRR and CCA is quite unclear. What sector should be involved in mainstreaming and planning; all sectors or does that dilute responsibility? What scale should the planning be at? Who are the intermediaries between communities and national policies that can implement plans? The research teams were left with more questions than answers. Research by the Ashoka Trust for Research in Ecology and the Environment (ATREE) in Darjeeling and Sikkim revealed the importance of place-based management given different socio-political and ecological contexts. The varied contexts require coordination across a range of stakeholders, including traditional local administrative bodies (dzumsa), district government, and NGOs.

Local, accurate and relevant data to support robust decision-making is often not available, transparent, and shared. This is a necessary first step to effective planning process. WWF Pakistan used an analysis of productivity loss to inform policy on fisheries and livestock sectors related to pre- and post-disaster and recovery after flooding in Manchar Lake and Chotiari. The Nepal Development Research Institute (NDRI) in Nepal used hydro-meteorological modelling and a socio-economic vulnerability assessment to provide policy recommendations on the establishment of a dam in the Koshi River basin. However, even if the data is available, disaster managers need to be comfortable with the data to enable informed action. This relates to both the reliability of the data, but also the way it is packaged and communicated. The researchers also explained the challenges they faced in communicating effectively to inform policy decisions at any scale.

The co-investigators of the six research projects identified their unique contributions to the debate on how to mainstream DRR and CCA at multiple horizontal and vertical scales. In the two-day workshop, participants advocated for the creation of a task force and network for action to support engagement between researchers and policy makers on DRR and CCA issues across South Asia. A network provides a platform for up-scaling the research lessons.

The clarity in which the six research projects identified the challenges of mainstreaming CCA and DRR suggests the enormous possibility and need for continued research. Yet translating research into action necessitates timely and succinct communication and engagement with policy makers at all scales. This continues to be a challenge worth confronting to translate these key lessons and questions.