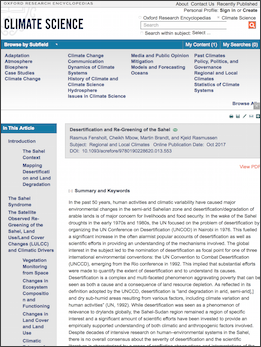 Despite decades of intensive research on human–environmental systems in the Sahel, there is no overall consensus about the severity of desertification and the scientific literature is characterized by a range of conflicting observations and interpretations of the environmental conditions in the region. Earth Observation (EO) studies generally show a positive trend in rainfall and vegetation greenness over the last decades for the majority of the Sahel and this has been interpreted as an increase in biomass and contradicts narratives of a vicious cycle of widespread degradation caused by human overuse and climate change. Even though an increase in vegetation greenness, as observed from EO data, can be confirmed by ground observations, long-term assessments of biodiversity at finer spatial scales highlight a negative trend in species diversity in several studies and overall it remains unclear if the observed positive trends provide an environmental improvement with positive effects on people’s livelihood.