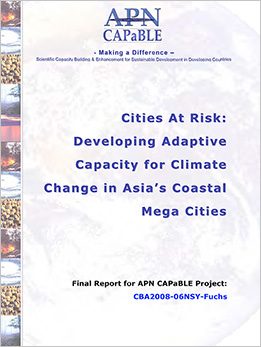 The Final Activity Report for the “Cities at Risk: Developing Adaptive Capacity for Climate Change in Asia’s Coastal Mega Cities” Initiative was submitted to the Asia-Pacific Network for Global Change Research, in November 2009. The Report was prepared by START, in Washington, DC & the East West Center, in Honolulu, HI. An adapted portion of the Non-Technical Summary is below.

Following the February 2009 workshop, major results and recommendations were summarized and shared with participants, who, in turn, shared the results and information about their workshop experiences with their home institutions. Cities at Risk recommendations were also shared by several participants at other relevant workshops and conferences, and a number of publications are being prepared to
disseminate results to other audiences.

In response to post-workshop interest from the WBI, START partnered with SEA-START, WBI, Moxie Designs, LEAD International and the Victoria University to facilitate follow-on “Training of Trainers” and adaptation visioning exercises in Bangkok, Thailand in June 2009. Several Cities at Risk partners have also submitted a proposal to APN requesting funding to support a two-week training activity that will introduce, review, analyze and apply issues of and tools for risk and vulnerability assessment and mapping in targeted Asian coastal cities. The training will build on the Cities at Risk workshop and recent studies sponsored by ADB, the World Bank and JICA.

Results:
Cities at Risk workshop interactions initiated a constructive dialogue among participants that increased awareness among urban planning and academic communities of the emerging risks, vulnerabilities and challenges faced by coastal megacities as a result of climate change and climate change impacts. The workshop was an impetus for action on two fronts. Participants from urban planning and management institutions, enthused by the experience, returned to their home institutions to share information about workshop discussions and experiences and to incorporate new insights and an appreciation for the need for early action into ongoing discussions and city planning. Workshop participants, as a whole, also drafted a set of recommendations that were intended to inform priorities for and development of future Cities at Risk programming and initiatives.

Participants of a series of training and adaptation visioning exercises held in Bangkok as a direct follow-on to the Cities at Risk workshop applauded the interactive and creative approach to problem-solving that the activities offered. The exercises facilitated experiences in which participants engaged in characterizing city communities and role-playing to determine options for coping strategies to deal with stresses including climate change hazards. Participants reported that the process forced them to think differently and created a common understanding among all stakeholders. They emphasized that the visioning exercise’s focus on planning helped them to better understand that everyone has a role in the planning process, not only government. It was agreed that the storyline / visioning approach enabled participants to become more connected on a personal level to the questions at hand (by combining, e.g., role plays and future storylines) and thus develop scenarios focusing directly on the future communities and people of Bangkok.

Relevance to the APN CAPaBLE Programme and its Objectives:
The Cities at Risk workshop and follow-on activities were aligned with the CAPaBLE Programme’s objectives and preferred activities in that they facilitated capacity building, science-policy-practitioner interfacing, awareness raising, and information dissemination. The activities created arenas for interaction, discussion, and networking that encouraged sharing of knowledge, experience, and scientific information on climate change impacts, vulnerabilities, and adaptation strategies in Asia’s coastal megacities.