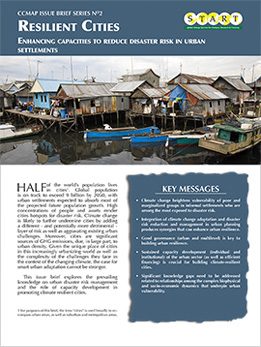 Half of the world’s population lives in cities. Global population is on track to exceed 9 billion by 2050, with urban settlements expected to absorb most of the projected future population growth. High concentrations of people and assets render cities hotspots for disaster risk. Climate change is likely to further undermine cities by adding a different – and potentially more detrimental – layer of risk as well as aggravating existing urban challenges. Moreover, cities are significant sources of GHG emissions, due, in large part, to urban density. Given the unique place of cities in this increasingly urbanizing world as well as the complexity of the challenges they face in the context of the changing climate, the case for smart urban adaptation cannot be stronger. This issue brief explores the prevailing knowledge on urban disaster risk management and the role of capacity development in promoting climate resilient cities.

The Integrating Climate Change Mitigation and Adaptation into Development Planning (CCMAP) project is a joint project of START, WMO, UNEP, IPCC, the University of Ghana, the University of Dar es Salaam, and the Bangladesh Center for Advanced Studies.