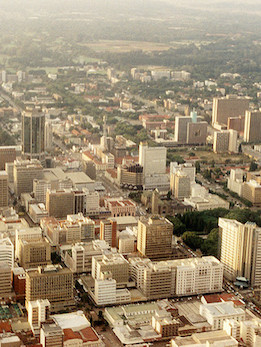 Three Global Environment Change (GEC) projects were funded by START as part of the Future Resilience for African Cities and Lands (FRACTAL) project from 2016 to 2018. One of these projects was conducted in the city of Harare, the capital of Zimbabwe. In this project, the Chinhoyi University of Technology partnered with the Harare City Council (HCC) and the Zimbabwe National Water Authority (ZINWA) to investigate the connection between climate, water and energy for the City of Harare as well as the decision-making processes related to these sectors.

An engagement process typical of the FRACTAL approach was employed in working with project partners and stakeholders. This process included preliminary meetings and consultations from where the burning issues for the city of Harare in the context of water and energy were derived. An Inception meeting to introduce the project to a broad range of stakeholders was convened in which the ‘co-design’ and ‘co-exploration’ models of FRACTAL were employed. This allowed a dialogue in which the dynamics of climate, water and energy were discussed while stakeholders and project partners were able to articulate their own work and links to these sectors in and for the city. A culmination workshop was organized at the end of the project to validate findings and elucidate insights for taking the project work forward.

The project employed a number of models including embedded early career researchers, engagement processes, city exchange visits and traditional  research methods to investigate objectives which included understanding the climate around the city of Harare in the past 30 years, the connection between climate and water levels in the river system that feeds the city, the typology of stakeholders in the water and energy sectors of the city as well as their roles in the decision-making processes.

The challenge: Interconnections between climate, water and energy in southern Africa

The resilience of many cities may be compromised due to a combination of climate change and other global change drivers as well as non-climatic factors such as population growth and development of new technologies which will increase the demand for energy and water. Most parts of southern Africa are already experiencing high variability in rainfall and river flows and changes to the geographical distribution of water resources, with the arid to semi-arid areas becoming drier, and other areas becoming wetter. This is a cause for concern, particularly as communities in the region are heavily reliant on rivers for their livelihoods. In addition, the bulk of the energy supplied in these regions is hydro powered.

Current energy and water management practices in the southern African region may not be robust enough to cope with the impacts of climate change on river flow and aquatic ecosystems, especially for the urban centers that consume high amounts of energy and water for various purposes such as industrial, domestic, and agricultural production.

Despite the importance of energy and water, studies that link climate, water and energy are still emerging in the region. There is widespread agreement on the need to study the water and energy systems, their interconnection, the vulnerability and risks associated with these sectors, and the impact on the livelihoods of communities, from household to national scale. It is imperative to develop appropriate response and monitoring systems to build resilience and manage cities sustainably.

Climate, water and energy in Harare
Results indicated that the average temperature and more so, the maximum temperatures around Harare have increased while rainfall is becoming more and more erratic with prolonged delay in the onset of the rainy season. An analysis of the relationship between climate and water flows showed a strong correlation between rainfall and water levels. In addition, Harare residents and key informants held accurate perceptions of climate trends,  and notably of increasing temperatures and decreasing rainfall. They also pointed out risks, vulnerabilities as well as adaptation strategies to the changing climate and the subsequent water and energy scenarios.

From research to action

Stakeholder engagement
Partners were engaged since the inception of the project through a platform that allowed them to assist project leads from Chinhoyi University of Technology to identify stakeholders in the water and energy sectors. It was also during these engagements that discussions on the city’s burning issues were raised and isolated to include specific issues to be addressed for the duration of the Harare START GEC project.

The stakeholders in the water sector of Harare include parent Ministry- Environment, Water and Climate; the Ministry of Health and Child Welfare; Ministry of Local Government, Rural and Urban Development; Harare City Council, ZINWA, EMA, Councilors, and non-governmental organizations, among others.

Embedded Researcher Model
Two early career researchers were attached for a period of three months at HCC and ZINWA at the beginning of the project. The attachment of the embedded researchers (ER) fostered good working relations and enabled continuous communication with project partners and stakeholders, as the ERs acted as the link between stakeholders and the university research team. The attachment enabled the ERs to easily access primary data using household questionnaires across six suburbs demarcated as low, medium and high density, as well as old and new, across the city of Harare. In addition, the ERs used key informant interviews to investigate perceptions around climate, water and energy at local, municipal and national levels. Secondary data was collected on climate (temperature and rainfall) and water flow levels from the Upper Manyame River section that provides water to Harare.

City learning visits
The Harare Research Team visited two other FRACTAL cities – Lusaka and Windhoek during city-learning exchanges aimed at facilitating knowledge sharing and learning, and at adding a comparative lens among the three cities. Water scarcity, for example, was identified as a cross-cutting issue, and more so in the informal settlements of Lusaka and Windhoek. The Harare Team had the opportunity to learn about the efficiency of the Namibia Energy Institute (NEI), and of the Gammas Water Works and Goreangab water reclamation in Windhoek. The Lusaka Research Team shared best practices about working closely with the community, while Harare’s Embedded Researcher model stood out.

Communicating successes and results
The Harare team put in place several processes to share the project’s successes, lessons learned and results, to the FRACTAL community and city and regional stakeholders.

Two key workshops, an inception and a culmination workshop, introduced the project and discussed as well as validated findings with stakeholders. Video highlights from the workshops will be made available online.

The team participated in several national and regional workshops, including the Zimbabwe National Adaptation Planning Stakeholder Consultation Workshop in Bulawayo, Zimbabwe and the Fifth International Conference on Climate Services (ICCS5) in Cape Town, South Africa. ERs also participated in a workshop for FRACTAL Embedded Researchers from different cities to meet each other, disseminate research outputs, provide an overview of embedded research activities in the cities, and facilitate intercity learning.

The results of the study will be published by the embedded researchers as academic articles and thesis in 2018.

START’s Global Environmental Change project in the City of Harare provided the opportunity to engage city stakeholders within the climate, water and energy sectors, using FRACTAL’s concepts of co-production and co-exploration.

Findings from the study show that the climate around Harare is changing and that there is a strong relationship between rainfall and water levels of the Upper Manyame River. Both residents and key informants perceive the changing climate and were able to point out the risks and vulnerabilities as well as the adaptation measures being adopted.

Embedding two early-career researchers with the Harare City Council (HCC) and the Zimbabwe National Water Authority (ZINWA) proved to be a successful approach in fostering of good working relationships with project partners and stakeholders, ensuring continued communication and engagement.

City learning exchanges with the cities of Lusaka and Windhoek were critical in sharing knowledge and gaining a regional perspective on issues related to water, energy and community engagement under a changing climate.

The project provided great impetus as part of the engagement process and for continued work towards building a climate resilient Harare.

Opportunities in Sustainability
START Biennial Report: 2020-2021
Cultivating Skills For Community Resilience as a Part of the Collaboration for Adaptation and Resilience in Mali (Co-FARM)