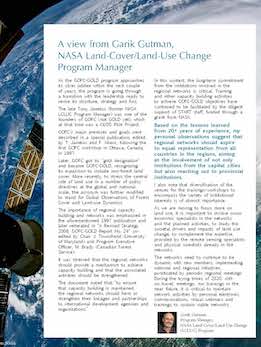 As the GOFC-GOLD program approaches its silver jubilee within the next couple of years, the program is going through a transition with the leadership ready to revise its structure, strategy and foci.

The late Tony Janetos (former NASA LCLUC Program Manager) was one of the founders of GOFC (not GOLD yet), which at that time was a CEOS Pilot Project.

GOFC’s major premises and goals were described in a special publication, edited by T. Janetos and F. Ahern, following the first GOFC workshop in Ottawa, Canada, in 1997.

Later, GOFC got its “gold designation” and became GOFC-GOLD, recognizing its expansion to include non-forest land cover. More recently, to stress the central role of land use in a number of policy directives at the global and national scale, the acronym was further modified to stand for Global Observations of Forest Cover and Land-use Dynamics.

The importance of regional capacity building and networks was emphasized in the aforementioned 1997 publication and later reiterated in “A Revised Strategy 2006: GOFC-GOLD Report No. 24” coedited by Chair J. Townshend (University of Maryland) and Program Executive Officer, M. Brady (Canadian Forest Service).

It was stressed that the regional networks should provide a mechanism to achieve capacity building and that the associated activities should be strengthened.

The document noted that “to ensure that capacity building is maintained, the regional networks should form or strengthen their linkages and partnerships to international development agencies and organizations.”

In this context, the long-term commitment from the institutions involved in the regional networks is critical. Training and other capacity building activities to achieve GOFC-GOLD objectives have continued to be facilitated by the diligent support of START staff, funded through a grant from NASA.

Based on the lessons learned from 20+ years of experience, my personal observations suggest that regional networks should aspire to equal representation from all countries in the regions, aiming at the involvement of not only institutions from the capital cities but also reaching out to provincial institutions.

I also note that diversification of the venues for the trainings/workshops to encompass the variety of institutional interests is of utmost importance.

As we are moving to focus more on land use, it is important to involve socioeconomic specialists in the networks and the planned activities, to study the societal drivers and impacts of land use change, to complement the expertise provided by the remote sensing specialists and physical scientists already in the networks.

The networks need to continue to be dynamic with new members, implementing national and regional initiatives, punctuated by periodic regional meetings.

During the trying times of 2020, with no travel, meetings, nor trainings in the near future, it is critical to maintain network activities by personal electronic communications, virtual webinars and trainings to sustain viable networks.