The involvement with the ACCFP program provided the opportunity to network and build relationships in the climate adaptation field. Thanks to the knowledge, skills and networks acquired, she participated in other cutting-edge programs, such as the first round of the World Social Science Fellowship, which positioned Chipo as one of the top climate adaptation early career researchers at that time. 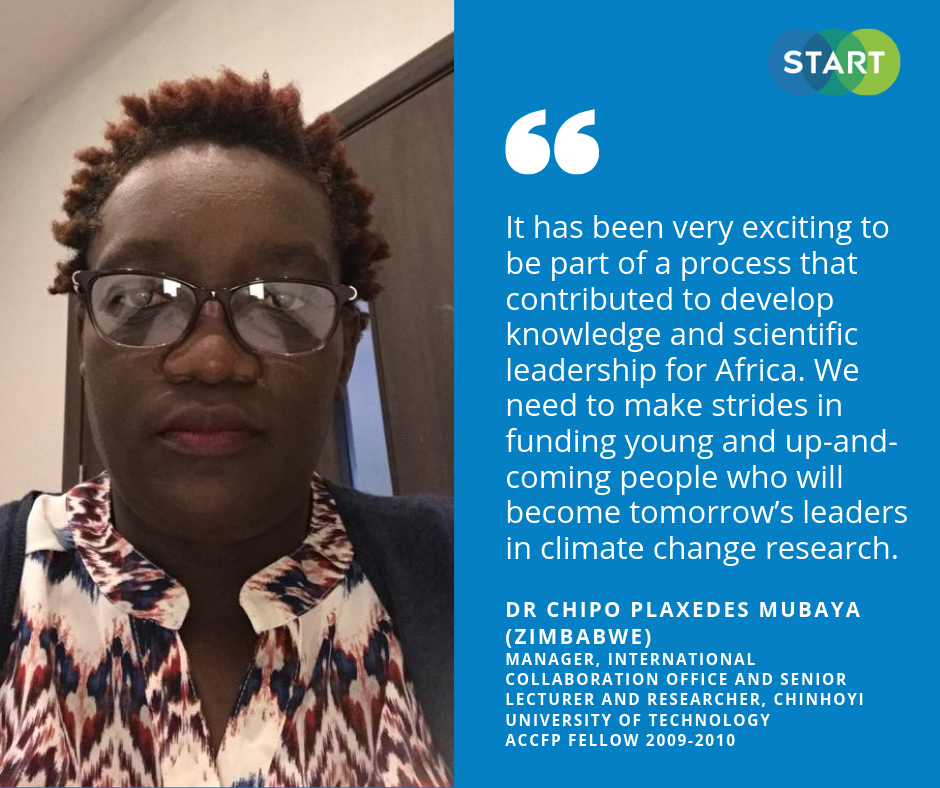 Currently Chipo is based at the Chinhoyi University of Technology in Zimbabwe where she is the International Collaborations Manager and also a researcher in the Centre for Development Studies. Chipo continues to work with the ACCFP program as a reviewer of applications and as a trainer during Advanced Institutes. She also serves as a mentor in other START programs such as the Future Resilience for African Cities and Lands (FRACTAL) program.

We caught up with Chipo on the 10th anniversary of the launch of the ACCFP program, to understand a bit more about the ACCFP’s contribution to her journey.

START: What brought you to get involved with START?

My first engagement with START was through the ACCFP, firstly as a recipient of the Doctoral Research fellowship and afterwards as the ACCFP Senior Program Officer in Dar es Salaam.

START: What have been the advantages of participating in the ACCFP program?

One advantage of participating in the ACCFP program has been the opportunity to contribute to developing knowledge for Africa. The continent has been lagging behind, not only in climate change research but in other areas as well. This means that we really need to make strides in funding young and up-and-coming researchers who are going to be tomorrow’s leaders in climate change research. So, I was very excited to be part of this process which contributed to creating climate change knowledge that is really needed in Africa.

START: How has your involvement with START impacted your career trajectory?

Receiving a Doctoral Research Fellowship from the African Climate Change Fellowship Program proved to be a turning point in my career. The fellowship brought with it networks, career and personal growth as I was just starting to work on climate change adaptation. In addition to contributing to the successful completion of my PhD, the fellowship provided exposure and has enabled me to work with both junior and senior researchers from different backgrounds. I have been invited to publish academic work and this enabled me to contribute to the global sustainability issues debate and improved my writing and communication skills.

I started off by conducting interdisciplinary work, and I have now transitioned to transdisciplinary work. I actively engage city stakeholders, as well as farmers and government stakeholders in the rural areas specifically for rural development. This is the journey that I have taken during the last 10 years, and as a social scientist I have really enjoyed spending time with the people who matter, practitioners and the people on the ground, the grassroots.

START: Do you keep in touch with other fellows and relationships built through the ACCFP?

I have maintained most of the networks that were initiated during the ACCFP Fellowship and Program Officer Post. One example is the relationship I built with Heide Hackmann, who was at that time heading the International Social Science Council, and who mentored me right from the time that I was in Dar es Salaam. She provided opportunities to attend conferences and present my work – at that time, I was still doing my PHD – and she also introduced me to the World Social Science Fellowship which I was awarded. We are still in touch and occasionally we meet – recently I have co-applied for a grant managed by her institution.

This is just one example; there are many other networks with peers and other people met through the ACCFP program that I have maintained.

START: What is your best memory from the ACCFP?

The culmination meeting in Dakar (2010) was a memorable one because of the high level of networking and because it was combined with a writing skills workshop.

START: What would be your recommendation to young researchers?

My advice to young researchers would be: remember that perseverance pays, hard work pays. It is not an easy journey but rather a difficult one as a woman, as a mother, as a wife, but it’s doable.