Two new Climate Advisory Resource Centers (CARCs) have been completed in Ghana’s Upper West Region as part of the Digital Agricultural Services to Improve the Livelihoods of Communities (DigitAL) program, an IDRC supported project led by the University of Ghana with partnership from START. The centers, one in the Jirapa Municipality and another in the Nadoli District, are equipped with mounted televisions, modems, laptops, webcams and virtual engagement tools that will be utilized for sharing information and promoting knowledge exchange between diverse groups linked with agriculture, climate change and food security. These new centers build from the work of two existing CARCs that were established in Lawra and Nandom Districts during the Adaptation at Scale in Semi-Arid Regions (ASSAR) project.

The DigitAL radio show also continues to shine. Having been on the air for 12 weeks now, it is currently the most active agriculture-focused radio show in both Lawra and Nandom districts.

Work with local women songwriters is also progressing with five informative agriculture and environment-focused songs having been composed by women in the program’s target districts. Preparations are underway to record the songs which will then be circulated in the form of an EP or mini album for use by various communities and radio stations. 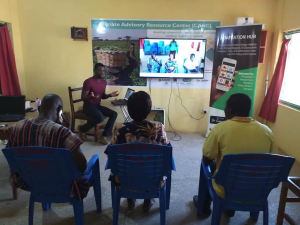 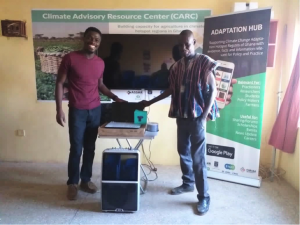