High population growth and rapid economic development in South/Southeast Asia are leading to the conversion of agricultural lands into urban and residential areas, while forests are destroyed to make space for agriculture. These changes in land cover and land use (LC/LUC) in the region have a significant impact on the region’s natural resources and climate.

To address these issues an international meeting was held in Quezon city, Metro Manila, the Philippines, in May 28-30, 2018, in the framework of the South/Southeast Asia Research Initiative (SARI) of the Global Observation of Forest Cover and Land Dynamics (GOFC-GOLD) program.

The goal of the meeting was to review the availability, potential, and limitations of different satellite data sources and methodologies for mapping, quantifying and monitoring land use and change, and assessing environmental impacts in South/Southeast Asia.

Over 200 experts participated in the meeting from 21 countries from Asia, Europe, and the North America. Space agencies from five countries in the region (Japan, Vietnam, India, Thailand and Indonesia) were represented.

The meeting included plenary and parallel sessions on agriculture, atmosphere, forests, land and urban themes, as well as poster presentations. After the meeting, 130 early-career scientists and students from the region participated in a three-day hands-on training on the use of remote sensing and geospatial technologies for LC/LUC applications.

The event was hosted by the Institute of Environmental Science and Meteorology (IESM), University of Philippines, Diliman, and sponsored by NASA LCLUC program, START, Japan Aerospace Exploration Agency (JAXA), National Institute for Environmental Science (NIES, Japan), University of Illinois Urbana Champaign (USA), and supported by 18 other local and international organizations.

The Summary of the meeting will be published in the NASA Earth Observer in the next months, and outputs will include a special journal issues and a book. 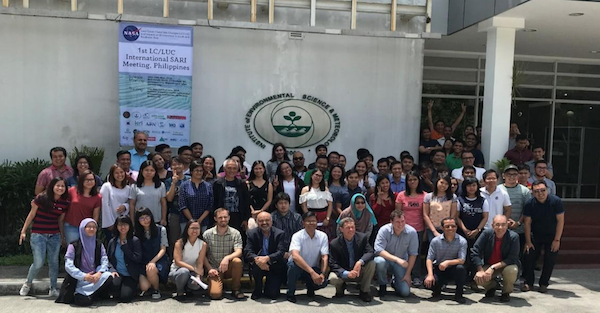